NSW Small Employer of the Year

Bale Defence Industries has received state-wide recognition for its commitment to skills development and training.

Last night, the company received the prestigious NSW Training Award for Small Employer of the Year at a Gala Event in Darling Harbour.

Bale Defence Industries Manager, Link Bale, said, “We feel very honoured to take out this award and it’s well deserved recognition for the excellent team we have here at Bale. It’s also a credit to HVTC and the schools in our area who assist us so much in recruiting and training such exceptional apprentices.” 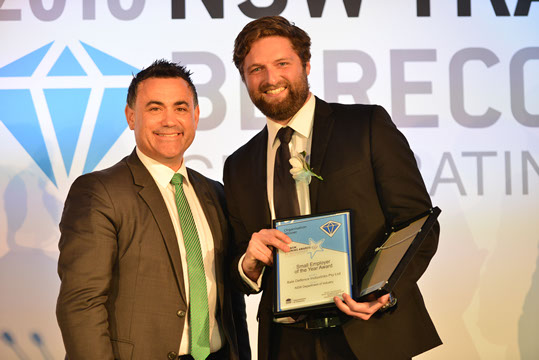 FEDERAL parliamentary secretary to the Minister for Defence Darren Chester was excited and impressed by the innovation at Bale Defence Industries on Thursday afternoon.

Lyne MP Dr David Gillespie and Mr Chester eagerly climbed into one of the unique rough terrain vehicles the Bale team has created for the Australian Army.

The parliamentary secretary said his visit to Lyne, which concludes today with stops at Taree's Steber International and Port Macquarie's Birdon, had a clear purpose.

"At the moment defence is engaged with the white paper, and I'm very keen to see how smaller and medium-sized businesses can be involved from there," Mr Chester said.

Link Bale said a huge amount of testing and expertise went into the RTVs.

"This is probably the most versatile vehicle that defence has ever had," Mr Bale said. 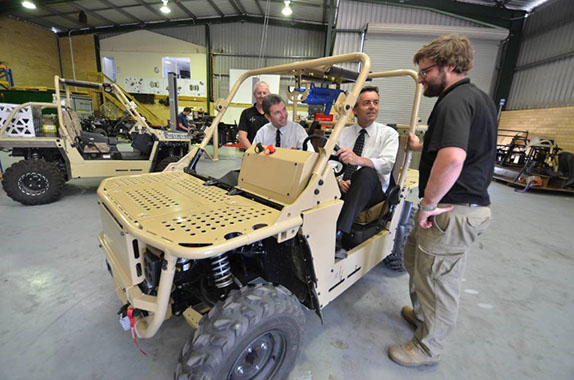 A PORT Macquarie business is at the forefront of innovation with the first of 19 specialised military rough terrain vehicles handed over on Friday.

Bale Defence Industries won the contract for the design, manufacture and testing of rough terrain vehicles for the Australian Army.

Bale Defence Industries mechanical engineer Link Bale said the business had been working on the project for two to three years including research and development, and working with the army.

Lyne MP Dr David Gillespie inspected the vehicles on Thursday, with the Defence Materiel Organisation taking delivery of the first vehicle the next day.

Many of the components for the remaining vehicles have been prefabricated in readiness for assembly and minor modifications.

"We've had to design and manufacture it from scratch," Mr Bale said. "To see the capabilities this will give them [the Australian Army], that is what keeps you coming to work every day and it is exciting to be involved in."

The rough terrain vehicles are suitable for use in remote locations.

"It is great for the local area," Mr Bale said about the project.

"We've used the best expertise we could locally and it has been a great learning curve for industries around the area to be exposed to a defence standard."

Mr Bale said the rough terrain vehicle contract was probably the most in depth project the business had undertaken and it had opened doors.

It allows Bale Defence Industries to attract some of the best young tradesmen from schools and technical colleges in the region.

Bale Defence Industries will repair damage, replace equipment and supply spare parts for the rough terrain vehicles over the next five years.

Dr Gillespie congratulated Bale Defence Industries on its ongoing work in both innovation and manufacturing.

He said company had developed a solid reputation, particularly in defence, for its innovation and supply of highly specialised and essential equipment used by the army and navy.

"This latest defence contract has seen the development of a lightweight tactical vehicle that will significantly benefit the operations of our frontline soldiers," he said.

The new rough terrain vehicles are a rugged and reliable all-terrain military vehicle capable of conducting operations anywhere in the world.

The vehicles can be carried inside or underneath military aircraft which will allow them to be used in even the most remote locations.

"I'd like to take this opportunity to congratulate Bob Bale and his team on the great work they have been doing over the years," Dr Gillespie said. 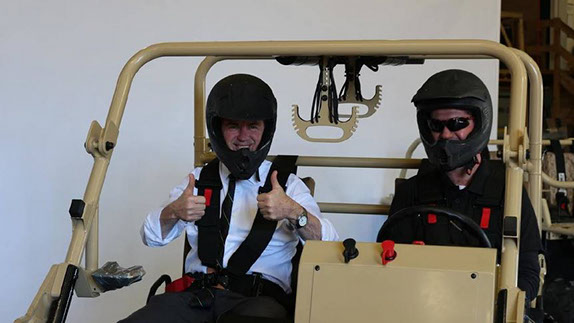 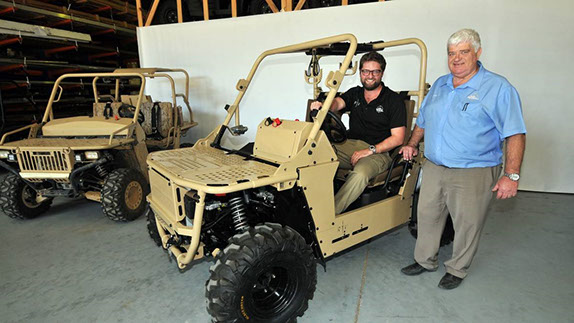 If you would like more details on a particular product or service please fill out and submit the form below and one of our team will contact you with more information.